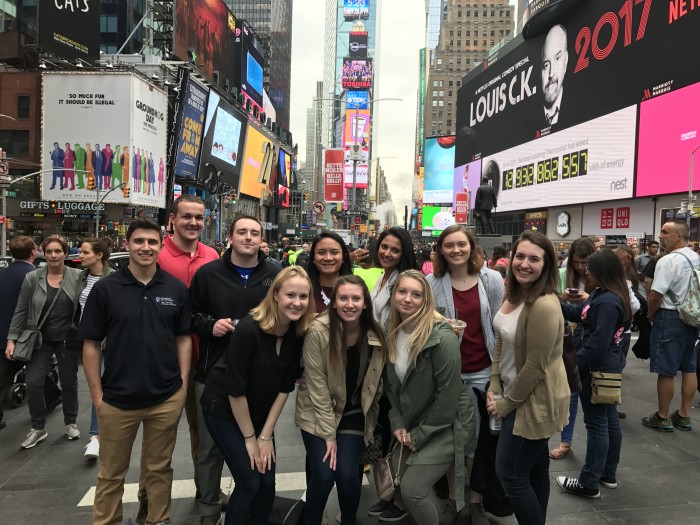 Most people expect business majors to move up in the world, literally. We are stereotyped by sky rises in the heart of New York City, surrounded by the sounds of traffic outside, and confined by the four gray walls of a cubical.  So what happens when this isn’t right for everyone, what happens when you don’t fit in this box?

I have never been one to enjoy the normal path. As cliché as it sounds, I will opt to take the “path less traveled” as apposed to following the crowd.  To me average and normal makes you even more of a number in our world of 7.5 billion. To stand out, you must make your own path; pick the environment you will thrive in instead of becoming apart of a cycle that isn’t right for you.

For me I didn’t think New York City was somewhere I could ever live because I love being surrounded by the quietness of the mountains and the feeling of a smaller town. But who can pass up a trip to New York City? Not me!

At the beginning of sophomore year I opted into a program called Sophomore Shadow, through Paul College, with the end goal of shadowing someone in a field I am interested in. During fall semester we worked in groups on a case study and presented the findings.  Simultaneously, individuals worked on outside tasks for points that would ultimately determine where their job shadow was, the highest number of points meant first pick.  My first pick was the overnight trip to New York City, which I was lucky enough to achieve.

We left on a Thursday morning by bus and arrived around noon at the hotel. From there we did not stop until 11pm that night. We were fully embracing the City That Never Sleeps.

We spent a portion of the afternoon at NBC Universal Studios for a behind the scenes tour and met up with Jennifer Temkin, a 2008 alum. The day ended with a Mets vs. Phillies game at Citi Field where 2015 alum Brittany Pinto was able to get us really good seats and share her story. We always hear that UNH alumni are everywhere but it really hit home when we met both of these alumni at well-known companies.

After a long morning of traveling it was the perfect way to spend the day. My first time touring NBC Studios and first major league baseball game were a success, but what really stuck with me was hearing both women talk about their paths.

To go to widely known businesses and meet people who went to school on the very same campus as me and see how successful they are, created a spark. They used connections to get where they are today, which really made me wonder where all the other alumni have gone and how I could access the wide network we have. At UNH, any job is within reach just by our web of connections.

Friday was just as busy. We each got to go to our own shadow locations for the day. I went to Women Moving Millions (WMM), a nonprofit whose mission “is to catalyze unprecedented resources for the advancement of women and girls.” To be a member, people, usually women, pledge at least $1 million to be paid over a period of 10 years. They can pick what organizations get the donations or what causes they would like their money to serve.  WMM have some pretty powerful members that are part of women movements around the world.

There are two very clear items that stuck out to me when I visited, one being the environment.  The office was located in the Seaport area, which is very much like downtown Portsmouth.  Congested traffic and skyscrapers didn’t surround it.  It was like we stepped out of the city.  The office was also very chic and modern, white walls and simplistic decorations. Although I have been to New York before, it always seemed like something I couldn’t get used to. Home is where the quiet mountains are, not the screeching tires and tall buildings, but this was the first time I had actually begun to see myself in NYC.

The second thing that stuck with me was the compatibility with my shadow person.  Sami Virga is the UNH alum that I spend the day with. She has the same view of not taking a normal path as me, we both find joy in organization, and strive on independence.  She is the Finance and Operation Manager, which is a job I never even thought of me liking. Once again this shadow was giving another situation I could see myself in.

I ended the day sitting in on a meeting about an upcoming event with the other staff at WMM. I have been toying with the idea of going into events for a while now so this opened my eyes to all the detail that go into planning something on a larger scale.

One city, two days, three alumni, and countless conversations later, I got so much more out of the trip than I ever thought thanks to Sophomore Shadow. The major piece for me is that I can find my place anywhere I am, small town or big city; it just takes a little bit of looking around.

Emily Grone is a sophomore Paul College student studying Business Administration with options in Marketing and Management as well as a minor in Information Technologies. Emily is a RA for a floor of business students in Sawyer Hall, an active member of Women in Business, and a tour guide for Paul College.  Emily is excited to spend her summer running the ice cream stand that she owns, Scoggins Cool Shack, as well as interning at Great Glen Trails in the event planning department. Her summer will be ending with a plane ride to Budapest, Hungary where she will be spending the semester studying at Corvinus University.

Newer PostWork as a Team, Win as a Team
Older Post“Rest” and Relaxation? Not So Fast …