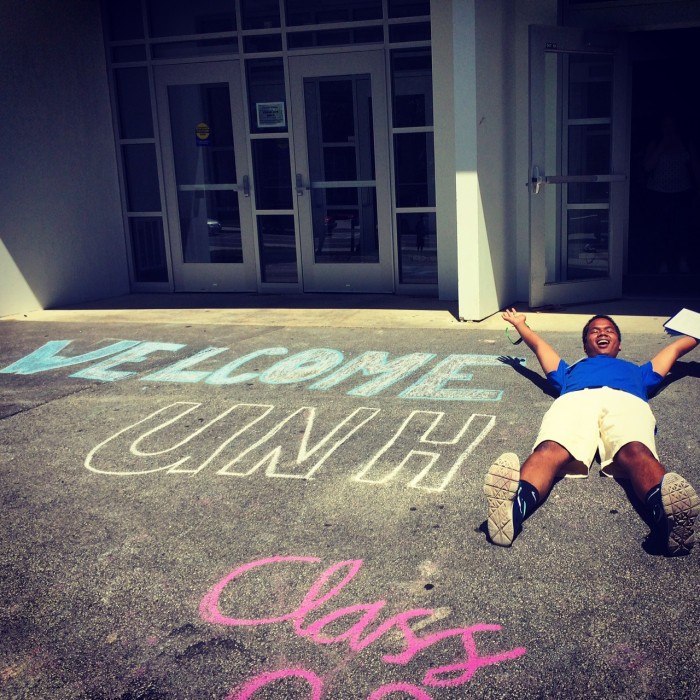 I just recently graduated from UNH with a degree in Business Administration this past May and I was presently surprised when I was offered a job for the summer to cover June freshmen orientation via social media. I was very excited to be a part of this record breaking orientation for UNH. My first day consisted of witnessing the never ending energy of the orientation leaders (OLs). I was a little taken aback at first, but after the first day I could not help but join in on their chants. Although, I refused to do the gigolo!

The picture to the left was the first Instagram picture that I posted as @UNHStudents. I had no idea that I would have to fight with these OLs to refrain from “Vine bombing” or “photo bombing” all of my posts. If you look on @UNHStudents social media you will see some familiar faces here and there.

I probably startled many of the incoming freshmen when I approached them and asked if they wanted to be on UNH Vine or Instagram. So after the first three people who looked at me like I had three heads I changed it up a little bit. I started introducing myself as someone who works for UNH social media and explaining more about what they were getting themselves into. Although, there were always students who were camera shy, few could not get enough of the camera!

After the first day I started to become somewhat recognized by the students and OLs. I was no longer mistaken as an incoming freshmen and soon called the “social media girl.” I’ll take it.  The students caught wind that they could be on UNH social media and were happy to assist. I had explained to them that it was on may of the current students bucket lists and they were able to cross it off their first day of being a Wildcat. I would go from Stoke Hall, where the students initially arrived, to the MUB and even downtown to capture any material I could. My time in downtown Durham was a blast! I was able to capture the students come out of their shells and really have fun with it. 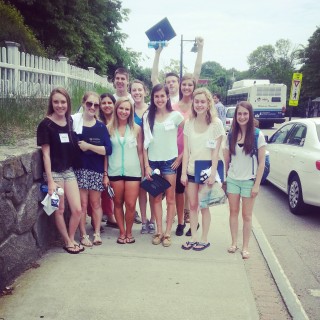 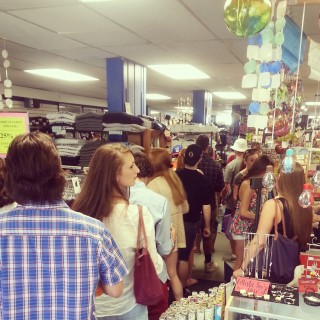 #UNH18 getting their free UNH T-Shirt! 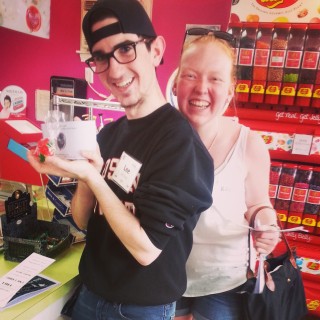 More free giveaways from The Candy Bar in Durham

A few days into orientation I was talking with my Dad and he said something about interviewing the incoming freshmen. That made me think about what I could do to let all the other Wildcats get to know the newest addition to the family. The brainstorming began once back at the office and with the help of some co-workers the idea to use Vine was created. I was inspired by the famous Humans of New York page on Facebook we now have #HumansofUNH on Vine. The #HumansofUNH project was under way and there were students asking me if they could be on Vine never mind me asking. They had heard about it from their friends that had been to earlier orientation dates.

I was always carrying around goodies that I was able to give away. The most famous one was a giant UNH logo sticker. These stickers are actually on the floor of the Whittemore Center here at UNH. People were shocked that they were able to have such a unique UNH prize. Not to mentions, how difficult they were to carry! Wildcats, just make sure that where every you put it, you don’t want to move it (sorry in advance parents)! I also brought T-shirts and car decals for parents and students to represent UNH. Parents were a big part of orientation this year. Let’s be honest, who doesn’t love a good embarrassing picture of your parents on your university’s social media page? Take a look at these honorary Wildcats!

All in all, I was so happy to cover orientation here at UNH! While I was working I was able to meet new friends, help a poor mom find her way through campus (who knew explaining campus on the phone would be so complex), and even reminisce about my time at UNH. I guess it’s official now, the class of UNH is one for the record books. Good luck with everything you do! Your hashtag: #UNH18