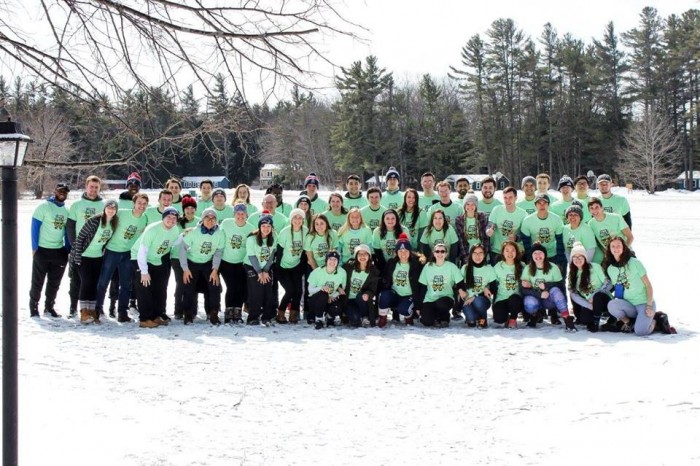 As Leadership Camp drew nearer, I became more and more skeptical about what I was REALLY getting myself into. A lot of my friends were going somewhere tropical or relaxing with their families for spring break, but I was to spend half of mine at a secluded campsite in western New Hampshire. As I rode the silent bus to the campsite with 42 strangers not knowing about anything I would be doing, I had several feelings of regret. Little did I know that the next couple days would be some of the most rewarding days of my life.

Throughout high school, I held several leadership positions. Secretary of this, historian of that, and even student council president my senior year. Although I held all of these positions and people told me I was a qualified leader, I always felt like something was missing. When I got to college, I knew I wanted to become a better leader. I was nominated as FIRE Igniter to represent my first-year academic experience class, which was a good start, but I didn’t know how to go forward with my goal. When I heard about Leadership Camp through my FIRE class, I thought that this might be the chance to find that missing “something.” And that’s just what it did.

From low-ropes courses to small team-building activities, everything we did at Leadership Camp allowed us to truly see who we were as a leaders. By the last day of Leadership Camp (sadly cut short due to inclement weather), these 43 strangers had all created a bond. We knew each other’s values,

Leadership Camp will impact me going forward at UNH. It forced me to think deeply about my core values—the things that I now know that I want to implement in my school work, group work, clubs, as well as relationships. It made me realize that, in the past, I have tried to be this extroverted leader that I simply am not. Leadership Camp made me more aware of my capabilities as a leader so I know exactly what I can bring to the table when it comes to working with others. This camp accentuated all of the things we have focused on in our FIRE classes by emphasizing the importance of working together, staying organized, getting involved, and not losing sight of goals. I know that “camp” can sometimes come with a negative connotation, but I encourage everyone to be open-minded to it and give it a shot. You won’t be disappointed.

Ali Lipinski is a first-year student at the Peter T. Paul College of Business & Economics. She is majoring in Business Administration and is hoping to minor in Health Management and Policy as well as Psychology. Ali is on the Dean’s List and was offered to join the Honors pro
gram. She graduated from Dover High School (Dover, NH) in 2016 in the top 10% of her class. In high school, she was a three-sport athlete and held several leadership positions.

Aside from academia, Ali is a FIRE Igniter, a tour guide for UNH, and is involved in several intramural sports on campus. She hopes to get more involved in the semesters to come. Ali works at UNH Phonathon and also holds a waitressing position in Dover. She has a passion for helping others, loves to laugh, and enjoys staying active. Some day in the future, she hopes to become a teacher.