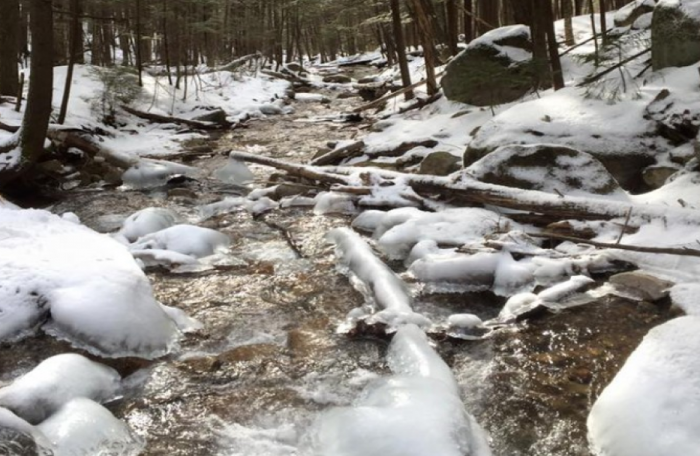 In theory, it’s winter. Up until that snow storm two weeks ago, it was a little hard to tell. But as you may remember, last year’s winter kind of just chilled (har har) until about now. And then one day it started snowing and didn’t stop for 2 months.

If you’re new to New England, or if you’re just bad at winter, then the prospect of warm weather being like, “BYE UNTIL MAY” means you’re doomed to spend the next couple of months feeling grumpy. Some of that’s normal, of course. But some of it just comes from being cold all the time. And I am here to say that you do not need to be cold all the time! You can be warm, even in winter! Here are a few things I’ve found that help:

Living the layered life is as much a part of being a New Englander as this flag:

There are a couple of reasons to live the layered life. First, it’s not about cold getting in so much as heat getting out. If you’re freezing every time you walk outside, the odds are you’re not wearing enough clothes. Some people just need to be told that it’s not weird to wear two pairs of socks or two pairs of gloves. Guess what? It’s not. What’s weird is wearing a t-shirt under a winter coat and then complaining about being cold.
But another reason to layer is that winter isn’t just about cold air: it’s also about wind, snow, and climbing out of the snowbanks that your jerkbag friends throw you into. That super soft cotton hoodie you love so much is a good insulator, but it’s not great in the wind. And your knit gloves do okay when you’re just out for a walk, but if they get covered in snow when you’re climbing out of the snowbank, they’re going to turn damp and freezing. That’s what layering is for: combining protection.

Long underwear
Maybe you’re thinking, long underwear is the kind of thing I’ll wear when I’m old enough to be a grandparent. To which I say: Nay! You, sir or madam, have been missing out!
Did you know that historically, longer underwear was invented by Greek gods both because they were cold and because they wanted to only ever be the most comfortable? Or maybe it was Norse gods? I can’t remember my tenth grade history class. Anyway, thank goodness they did.

Get infatuated with flannel
I was about to combine flannel and infatuation to make inflatulation, but that sounds terrible on so many levels. Anyway, a flannel is good fabric. They make shirts out of it, they line jackets and pants with it, and they even make bed sheets out of it. Flannel is hardy, provide great insulation, and makes you look like a lumberjack—or a lumberjill.

Wool socks
This category comes with a warning: once you start wearing wool socks, you will immediately regret the existence of all your cotton socks. Wool socks are softer and warmer than cotton, and they continue to keep you warm when they get wet. Why? I don’t know, either physics or chemistry. These days, they come in all kinds of patterns, colors, and designs. You can wear them to work, to school, or walking up a mountain. You can wear them to bed if you don’t mind being a heathen.
Now, some of you are thinking, but I should still keep a couple pairs of white cotton athletic socks for the gym, right? Everybody knows you don’t want to wear black socks with gym shorts. To which I say, there’s nothing classier than wearing wool argyles on the treadmill, especially if you pull them up as high all they’ll go.

Don’t Hibernate
I know it’s tempting to throw on your flannel bathrobe and climb in bed and spend all of February watching the X-Files—not because you like it, but because people used to like it and you’re trying to figure out why—but actually the best thing you could do is get up and get out.

This doesn’t have to mean going skiing or winter hiking or ice climbing. (If you’re inclined to do that, probably nothing in this blog is news to you.) It might just mean going to get a hot chocolate at Breaking New Ground. It might mean building a fort in front of your friend’s door so you can barrage her with snowballs after texting her to come outside. You could sign up for free light therapy at UNH Health Services. You could even just take a walk around campus for no other reason then that snow is really pretty.

After all, this is New England! Home of Hank Thoreau, who lived in a time before Under Armour, even before UGGs! He was the kind of stubborn optimist who said things like, “Why is it that a bucket of water soon becomes putrid, but frozen remains sweet forever?”

Or maybe you don’t have to be that optimistic. But you can, at least, be warm.