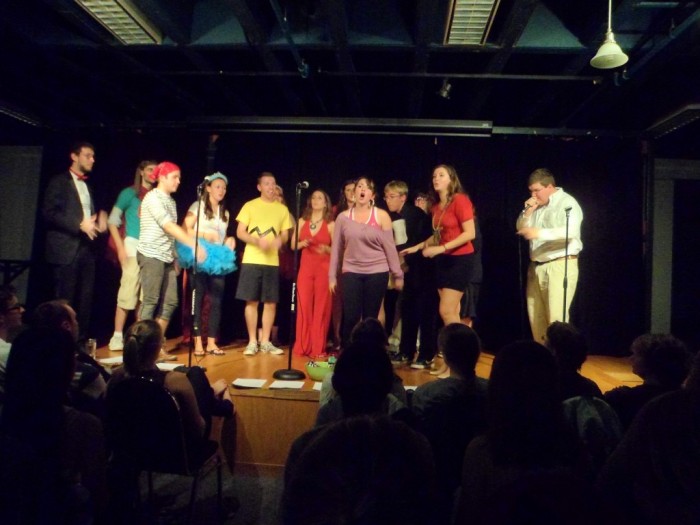 Last night I had the pleasure of going to Octobapella, a show run by Off the Clef, one of UNH’s two coed A Capella groups. Being new to UNH, I had no idea what to expect—but they were absolutely amazing. Comprised of students from the classes of 2013-2015, Off the Clef blew the audience out of the water with their renditions of David Guetta ft. Usher’s “Without You;” the classic “Ring of Fire” by Johnny Cash; One Republic’s “Marchin’ On;” as well as Gavin DeGraw’s “Sweeter;” and Katy Perry’s “Part of Me” (and more!). Since I refuse to ever let go of my childhood and anything from the 90’s, my personal favorite was their version of Destiny’s Child’s “Survivor.”

Not only did Off the Clef provide music, but the A Capella group decided to celebrate Octobapella by dressing up for Halloween a little early! The cast of, but not limited to, Quail Man, Princess Leia, Peter Griffin, Toddlers in Tiaras, and a birthday suit, provided the audience with various trivia questions between numbers. The topics ranged from Pokemon to anatomy – those who screamed out the right answer first won a candy bar. Even though they already provided trivia, laughs and candy, it was not enough for Off the Clef, as two group members dressed as DHOP (Durham House of Pizza) girls raffled off a t-shirt and $20 gift certificate to DHOP itself! The lucky winner was student Kelsey Ford.

The passion and talent these students have for music is extremely apparent—not only because the Entertainment Center was at capacity , but because the entire group was engaged and seemingly enjoying themselves the entire show. Their ability to get the audience involved made everyone feel comfortable to sing and laugh along with the group when they made jokes to each other. If you’re at UNH, you should, without a doubt, go support Off the Clef during their next show December 8th at 8pm in the Strafford Room of the MUB ($3 for students, $5 for non-students) – I know I’ll be there!