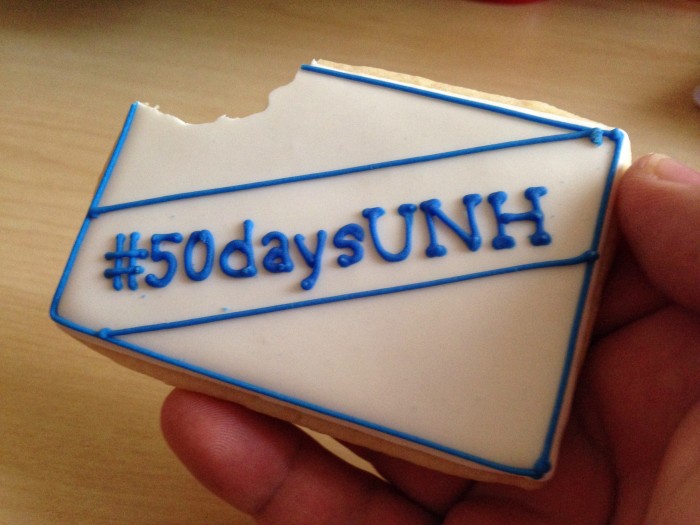 Last week the UNH Alumni Center was tabling in the MUB.  I was on my way to or from class, and decided to stop by and see what was up.  One of the representatives from the Alumni Center was there, and had all these fun goodies – cookies, information about alumni networks after graduation, and this cool poster display with sticky notes full of places people were going and things they were doing after graduation.

She also explained to me the #50DaysUNH campaign.  With 50 days to go until graduation, the Alumni Center was starting a Twitter scavenger hunt using the hashtag #50DaysUNH.  Each week they would Tweet a clue about the location of a prize and it was up to seniors to find it!  After leaving the MUB, I enjoyed my free #50DaysUNH cookie and didn’t think much of the scavenger hunt because it wasn’t starting until the following week.

This past week, as I was leaving work at Hood House, (where you should come visit me for drop-in resume review) I was scrolling through Twitter and noticed that the Alumni Center had posted a #50DaysUNH Tweet – “#50DaysUNH: What building would Fred Olsen ’97 go to for Int’l edu?  Find the @UNHAlums postcard & follow directions to claim prize! #UNH14.” It just so happened that the clue led me right to Hood House (the answer was the Center for International Education Office), where I was!

I found the envelope outside of Hood House, and the directions told me to get in contact with Megan Hales, who works in the Alumni Center and we arranged a time for me to go pick up my prize!  I went down to the Elliott Alumni Center later that week and got to meet Megan.   I was absolutely shocked at how great my prize package was!  I got a basket filled with stickers, a t-shirt, a key chain, two Red Sox tickets, pom-poms, a notebook and pen, magazines and catalogs, a coffee mug, and more!

I want to send a huge shout out and thank you to the Alumni Center and Megan Hales for such an awesome prize package!  I would encourage seniors to follow @UNHAlums on Twitter and you could win a great prize in the upcoming weeks.  There’s less than #50DaysUNH until graduation! (Yikes, only 39 days to go?)