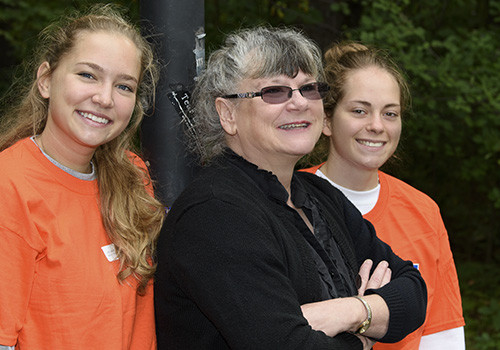 Professor Siggelakis teaches constitutional law, the judicial process, law and society, and American political thought, among other topics. Students are impressed by her mastery of subject but equally impressed by her go-the-extra-mile dedication. "She took teaching to a different level and really understands that it goes beyond the classroom," says one of her former students. "She took time to get to know her students."

Her teaching philosophy is this: "No one can be interested in everything but everyone can be interested in at least one thing in my courses. I try and help people find that one thing." In her Supreme Court and Constitution course, she focuses on constitutional law but also covers the history of judicial nominations, media coverage of federal courts and even the architecture of the Supreme Court building. She's determined to spark curiosity one way or another. Along the way, it's most important that students develop excellent writing, research and presentation skills to prepare them for careers. Students may not remember the specifics from her courses, and that's OK, she says. She just needs to be sure they have learned good habits of thought.

On the other hand, some students do remember the specifics. An alumna who works for the City of Nashua wrote Professor Siggelakis to tell her that what she learned in the administrative law course allowed her to correct city officials when they misinterpreted a new bedbug ordinance. "A small thing to some," says Professor Siggelakis, "but it meant a lot to me."