Accounting and Finance
Excellence in Teaching, 2011 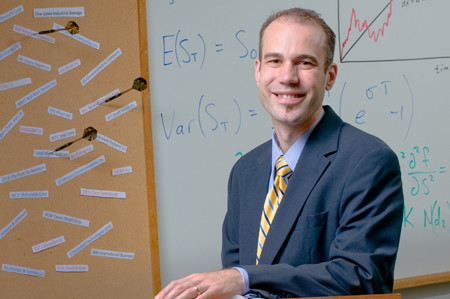 Learning about investment analysis, derivatives securities, and the financial markets may seem like a rather dry experience for undergraduates and graduates alike, but in the last few years as the global economy has crashed, William Johnson’s students have been more attentive than ever before. While the recession and economic downturn have had a negative impact on millions, it has been a teaching boon for Johnson.

“Finance is inherently interesting. You find lots of people who think finance is not interesting, but finance is so important in our day-to-day activities. It is pervasive. It affects everyone, even people who don’t have a bank account. Without understanding finance, I don’t know that you can really understand the world we live in,” he says.

Johnson’s path to teaching at the university level took a circuitous route; he started his career as an engineer after receiving his bachelor’s degree in engineering from Rensselaer Polytechnic Institute and then went back to school for his MBA at State University of New York at Buffalo. There he realized that teaching finance was where he wanted his career to take him. He subsequently earned his PhD in finance from Michigan State University.

Stephen Ciccone, associate professor of finance, credits Johnson’s background in engineering with his ability to teach the more technical aspects of his courses. “His teaching techniques make highly quantitative material considerably less intimidating for our students, who often have little training in mathematics,” says Ciccone, who nominated Johnson for the award.

And while the recession has helped Johnson make finance more relatable for students, even before the financial meltdown one could have little doubt about Johnson’s ability to pique the interest of his students. According to Ciccone, Johnson “can hold the interest of virtually any audience.” His students respond to his passion and the excitement he generates about finance with increased attentiveness, which leads to increased learning.

“What I love the most about my job,” Johnson says, “is that I get to investigate something I’m interested in. I do it because I love it and because I’m curious about it.”