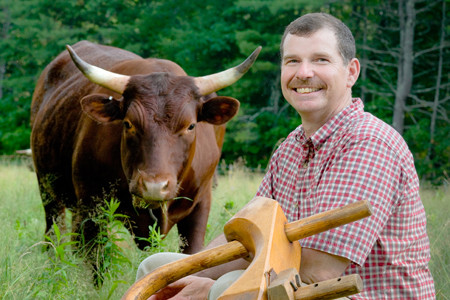 In a remote corner of Africa, a poor farmer becomes wealthy when he sells a prized pair of oxen. In rural Cuba, a family’s ox team can plow more land for more crops, giving the family a chance to reliably feed itself.

And in Durham, New Hampshire, a college student rises before a winter’s dawn to shovel manure, tend cows, and learn about research that is changing the business of agriculture.

People the world over appreciate the work of Drew Conroy, and for good reason: It helps them put food on the table. “I’m passionate about using ruminant animals to feed the world,” says Conroy, who began teaching at UNH in 1990. “And my work in this field is as all-encompassing as the other great research and outreach you find at UNH.”

Draft oxen in particular are ideally suited to working the land in places where tractors are unaffordable or impractical. And a key element of Conroy’s research aims to refine and promote this ancient way of farming to make it more accessible.

“If you go back in history and really study how societies developed, you can see that oxen changed the world,” Conroy says.

Growing up on a farm in Weare, N.H., Conroy owned his first pair of oxen when he was 13 years old. For nearly 35 years now, he has been training his own oxen and sharing his passion for education and service by judging 4-H competitions, leading oxen training workshops around the world, and teaching about oxen at living history museums, including Old Sturbridge Village and Colonial Williamsburg.

Conroy has written three books and nearly 100 articles for both scholarly journals and the popular press, produced five educational videos, appeared in two major motion pictures, and consulted on television documentaries. He spent a year in Namibia as a Fulbright Scholar in 2008, teaching college-level courses, researching the effects of drought on livestock, studying an animal control fence along the Angola border, and exploring the economics of draft animal power.

At home, he earns high praise from students and colleagues at the Thompson School, where he teaches about dairy cattle care and farm management, and leads the popular Cooperative Real Education in Agricultural Management (CREAM) class.