Earth, Oceans, and Space
Award for Excellence in Public Service, 2010 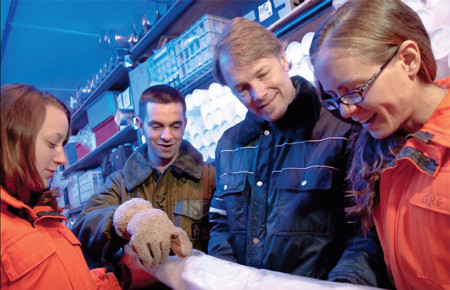 Cameron Wake began his research career using ice cores recovered from the Himalaya, Tibetan Plateau, and the Arctic to look at big-picture climate change. But over time he realized that picture he was seeing was too large for most people to fathom, let alone act upon.

“As I learned more about human drivers of climate change in the late 1980s and ‘90s I became very concerned about what I saw as a lack of action on society’s part,” Wake recalls. “On numerous occasions, I told people that if policymakers and the general public knew what I knew—that climate change is a significant threat to our quality of life—they would act differently.”

So, at risk to his research career, Wake shifted gears in an effort to help alter the collective consciousness. He brought his focus down to regional-scale climate change, and began putting more time and energy into becoming a translator of science. Today, Wake is well known as an accomplished practitioner of “engaged scholarship,” a process in which university faculty members collaborate with external partners on mutually beneficial projects to create and generate knowledge that is of practical use to society at large.

Tom Kelly, UNH’s chief sustainability officer, has worked with Wake for a dozen years and praises the wide range of public service to which Wake has applied his expertise in climate science, including projects directly serving the University community. “Cameron’s commitment to sharing his research with the larger community, especially decision-makers at the state, regional, and federal levels, is laudable. He is a real leader in the new movement of engaged scholarship for sustainability,” says Kelly.

Wake says that the University’s endowed sustainability program and its nationally recognized Engaged Scholars Academy have played a major role in helping him pursue his engaged scholarship work, which, he stresses, is at its core all about sustainability. “Today’s big, societal questions revolve around the issue of sustainability, which I would define as being the big picture.”

END_OF_DOCUMENT_TOKEN_TO_BE_REPLACED

This award recognizes and honors exceptional achievements in the area of public service. Individuals who receive this award have engaged in outstanding service activities that are dependent on their academic expertise and that support the mission of the university. The types of activities to be honored should be related to a candidate's academic field and may include exceptional service to local, state or federal governments, to non-profit organizations or agencies, to business or industry, and to the university. UNH benefits-eligible faculty members are eligible, except those who have received this award within the last five years.