Kinesiology
The Jean Brierley Award for Excellence in Teaching, 2010 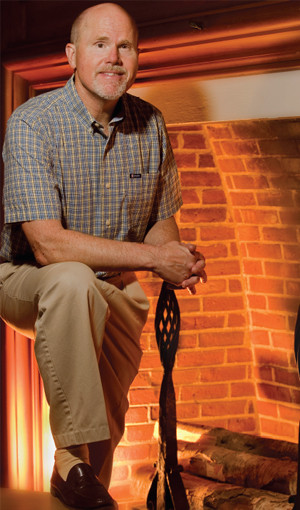 A Jimmy Fund Golf executive and a soccer coach. An athletics director and a professional hockey player. Beyond their obvious interest in athletics, the common thread that joins these UNH alumni is a professor whom they credit with shaping them both professionally and personally: Steve Hardy.

“Without a doubt, Steve Hardy was the most influential professor in my time at UNH,” says Marc Hubbard, ‘06G, head coach for Southern New Hampshire University’s men’s soccer team. Adds Tim Barry ’98, associate director of Jimmy Fund Golf, “Simply put, I believe Professor Hardy made me the person I am today.”

The secret may be the correspondingly high regard in which Hardy, who won an Excellence in Teaching award in 2009, holds his students. “They’re the reason I’m in this business,” he says. “I ask a lot of them, and I am always amazed by how much they are willing to give back.”

Giving back includes being a source of support to Hardy and his wife, Donna, who have survived the loss of two of their three sons during Steve’s tenure at UNH. Though he talks about it freely, two-and-a-half years after his youngest, Nate, was killed in Iraq, and more than 17 since his firstborn, Josh, succumbed to brain cancer, there are days Hardy’s sense of loss is still raw. Teaching, he says, is what continues to give his days shape and purpose. “The classroom is the one place where I can focus 100 percent.”

In addition to being a full professor of kinesiology, Hardy is an affiliate professor in the UNH history department, and he brings an academic’s rigor to a range of sports studies subjects, with an emphasis on primary research and projects that have real-world applicability.

Students may enter his classes with the erroneous impression that course content is going to be a snap, but they leave more than educated; many of them leave transformed. Soccer and lacrosse All-American Maja Hansen ’96, now director of Georgia Tech ticket operations, speaks for more than herself when she reflects, “I’m grateful for the countless hours Professor Hardy spent discussing my academic path and coursework, as they led me to where I am today. For me, he will always be a teacher of lessons and a mentor for life.”

END_OF_DOCUMENT_TOKEN_TO_BE_REPLACED

The Jean Brierley Award for Excellence in Teaching recognizes excellence in teaching by a faculty member over the course of a long-term distinguished career at UNH. A bequest from the estate of Jean Brierley, Class of 1930, established this award. Professor Brierley established the endowed fund in 1973 to recognize teaching in any field or discipline at UNH. The recipient will give a presentation at an annual event sponsored by the Center for Excellence in Teaching and Learning to help celebrate and promote good teaching. UNH benefits-eligible faculty members are eligible, except those who have received this award within the last five years.