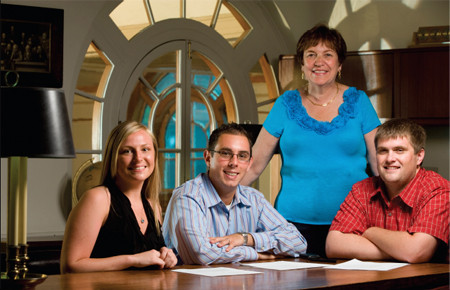 Two years ago, Ellen Cohn hosted a dinner party for her graduate students, past and present. She did it, Cohn says, because she thought it would be nice, not because it has anything to do with her graduate mentoring role. Still, it just might add to the reasons she’s so good at what she does.

“I had really great mentors who made a difference in my life,” says Cohn, who came to UNH in 1978. “Now it’s a little like ‘pay it forward.’ I think that’s kind of my role.”

To that end, Cohn’s approach to mentoring reflects many of the positive attributes she found in her own mentors: being critical but supportive, providing helpful feedback, encouraging students to take chances.

Through the years, she has mentored 20 doctoral students in psychology and eight master’s students in justice studies. She often lets her students take the lead, urging them to apply for external research money and offering them the chance to lecture as part of her class.

In January 2011, doctoral candidate Rick Trinkner ’12G will be submitting a grant proposal with her to the National Science Foundation Law and Social Sciences program. Recent doctoral students Don Bucolo ’10G and Erin Goforth Dupuis ’08G also have had their work published as a result of Cohn’s mentoring.

“I’ve had papers published from a project where students were the first authors,” Cohn says.

Associate professor of psychology Cesar Rebellon says Cohn’s gifts as a mentor have not gone unnoticed by her colleagues. “I have met many academics who are driven, few who are driven as much as Ellen, and none who are more driven on behalf of other people, particularly student mentees,” he says.

Cohn hopes her pay-it-forward philosophy will stay with her students. “Maybe some of these students will be in a position someday to be the mentor,” she says. “Maybe they can learn something from me and pass it on.”

Maybe, even, over dinner.

END_OF_DOCUMENT_TOKEN_TO_BE_REPLACED

The Graduate Faculty Mentor award is designed to honor a faculty member whose commitment to excellence in graduate student training has contributed significantly to graduate students’ professional development. Forms only accepted during application period.